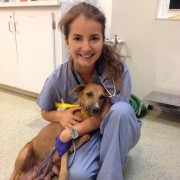 I grew up in a small village called Send in Surrey. For a long as I can remember I wanted to be a vet. We lived in a semi-rural area next to fields and always had a menagerie of pets in the house born from my mum’s love of animals. Despite always knowing I wanted to get into veterinary, the wildlife aspirations came a while later.

I had a South African chemistry teacher from the age of 11 or 12 who knew that I wanted to get into veterinary and suggested I look at South Africa to go to university as the veterinary campus at Pretoria is one of the best in the world. After looking more into it, the idea of getting the opportunity to work with big game and endangered animals seemed tempting so we went out to visit the campus the year before I was due to apply.

It’s a dedicated veterinary campus with amazing facilities. I remember getting back and sending in the application, being a bit trepidatious but excited about the prospect of going. To my dismay, I discovered there aren’t many places for international students and those spots normally go to African nationals. Regardless, my visa application couldn’t be completed because I didn’t have English as an A level to show my language proficiency. (Makes no sense I know!) It was incredibly disappointing and I didn’t really know what to do next.

I was devastated that going to Pretoria didn’t happen as I really had set my heart on going to South Africa by that point. Having done a trip down there to volunteer at an animal sanctuary in Thornhill near Port Elizabeth the previous year and visited the university, I had fallen in love with the place. Regardless, I had to start looking at my other options.

This might sound strange but even though I wanted to do veterinary I wasn’t a big fan of chemistry or physics! I took the UK university veterinary school requirements a bit too literally when they said they wanted biology, chemistry and ‘any other third subject’. I chose History of Art as my third subject because it combined two of my favourite subjects and shortly after the rejections came flooding in. Hindsight is a wonderful thing! Although, I didn’t really want to go to university in the UK anyway, after being told I couldn’t get a visa for Pretoria, it meant I had zero back up options. It looked as if I would either have to take a year out and do Physics and Maths A levels or do a science degree before doing a veterinary degree – none of those were great options!

I found out about St George’s University in Grenada because they are affiliated with Nottingham University and I was looking at ‘Clearing’ on UCAS (this is where courses that still have places are publicised for people who haven’t had offers). The course in Clearing was for veterinary students to do a year at Nottingham vet school and then go into the class in Grenada for the rest of the degree. To be honest, I had never heard of Grenada let alone the vet school there!

Rather than applying for the Clearing course, I decided I was going to apply to SGU directly. I went for a gruelling interview in London for a few hours, I remember walking out of it thinking it had gone horribly. They have two intakes; August and January. I had my interview in late October and didn’t hear anything back until mid-December so assumed that if it were a ‘yes’ I would be starting the following August.

To my surprise they contacted me wanting me to start in 4 weeks and move across the other side of the world. It was a little overwhelming…It was really my only option if I wanted to become a vet unless I was going to take a forced gap year and do a Physics or Maths A level so I accepted with a lot of trepidation….and so the story begins!